Core Surveys > Uncategorized > Town Of Asbestos: Once a Lucrative Location – Now a Killer

Town Of Asbestos: Once a Lucrative Location – Now a Killer

Simon Evans visits the town of Asbestos in Canada

I recently visited the town of Asbestos in Quebec, Canada, which until as recently as two years ago was thriving and prosperous, home to the largest operational asbestos mine in the world, meeting around three-quarters of the global demand for asbestos. Now, it is a ghost town, with deserted homes and few people on the streets. Its newest building is a cancer clinic. 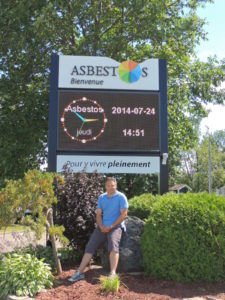 The town’s largest employer, Jeffrey Mine, opened in 1879, finally ceasing production in 2012 when an anticipated $58m loan was retracted. Jeffrey Mine continues to argue that the Chrysotile (white) asbestos found here is in no way dangerous and, therefore, the mine should not have been closed. In fact, the scandalous and long-term cover-up of the dangers associated with asbestos has been so effective that, even today, some locals still believe the industry’s claims that white asbestos can be used safely.

Had the mine stayed open, much of the asbestos would have been sold to India and China. While asbestos has been banned in the UK since 1999, it is still used in large quantities in many parts of Asia, Eastern Europe and South America, and controlled use even continues in the USA and Canada.

Due to its inherent properties, Chrysotile asbestos has been used over the years for products such as ropes, fire blankets and flashguards, as well as commonly being found in asbestos cement products.

The remaining inhabitants of Asbestos are fiercely proud of their 130-year heritage. Generations have lived and died working with this lucrative mineral. As you enter the town you are greeted by a ‘Welcome to Asbestos’ sign, proudly perched upon an ornamental rockery that clearly contains asbestos, and at the mine site itself, there is a viewing platform, the entrance to which is again decorated with large asbestos-filled rocks, overlooking the mile-wide hole of the abandoned mine. A hole, incidentally, that is so deep you could stand the Eiffel Tower in it with height to spare. I had been warned that I may get strange looks when visiting, and sure enough, I did. The sideways glances from the locals weren’t subtle. But since what was once the hub of their working community and the main source of residents’ income is slowly but surely becoming a tourist attraction, their less-than-effusive reaction to onlookers is an understandable one.

The equipment pictured was once integral to the daily business of the mine, but now stands still, and oddly clean, around the town – relics of a dying industry. The massive earth-mover is capable of shifting up to 200 tonnes in one load, and the asbestos-containing rock would then have been processed to release the valuable product from within. Take a look on Google Earth and you’ll be able to better appreciate the sheer scale of this vast mine; zoom in a little and you’ll even be able to see some of the earth-movers at work – certainly more at home there than in a municipal car park down the road, as this one is now. 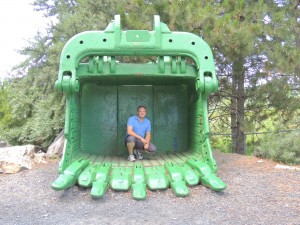 My visit to Asbestos was an eye-opening one – this versatile mineral, which my company is in the business of making safe, was once highly prized while its workers were severely exploited. It was also a chilling reminder that the risks and dangers of asbestos have yet to be acknowledged around the globe. Should you be interested in learning more about the town of Asbestos, and the industry cover-ups and misinformation that surround this deadly substance, follow this link to a comprehensive and enlightening article in The New Statesman.

For any concerns or queries about asbestos in your buildings, please contact us.